The Vurtego V4 Pro is the best extreme pogo stick we have to offer…and the best ever created. It takes everything the V4 has and kicks it up a notch. The design is based on the idea of a portable trampoline. The best riders in the world can jump 10+ feet in the air on it. The more air you pump into the V4 Pogo Stick, the stiffer the spring will become. The stiffer spring allows you to jump higher than a traditional pogo stick—much higher.

If you’re looking to do tricks, jump over stuff, or go as high as possible – the V4 Pro extreme pogo stick is your best bet.

The Vurtego V4 Pro pogo stick is designed for riders who weigh 75 pounds or more. For lighter weight riders, please read more here before purchasing. If you still have questions, shoot us an email and we’ll help out.

Our pogo sticks come fully assembled and ready to jump on. All you need is a pump to add air.

International orders may be subject to import duties/taxes. Check out our shipping page for more information.

I loved it. It’s so fun and it’s a very good exercise and all of my friends and family loved it as well they thought it was awesome.

So a few months ago I was thinking about nothing in particular, when it hit me out of the blue....."do they make pogo sticks for adults?" A couple clicks later and yes they certainly do! On my screen was a display of various "adult pogo sticks" from a myriad of different companies. Five minutes of research weeded out every one of them and left only Vurtego. I checked out their site and was more than impressed, very curious and extremely tempted to buy one right right then and there. The only thing holding me back was the price. It seemed a pretty steep price for an old pogo stick. A kids toy right? I figured I would give it a week or so and think on it. A week later and I'm still thinking about it and ended up saying "f*** it, just pull the trigger". I pulled it. Hard.........
It is so WORTH EVERY PENNY!!!!! First off, yes, kids can definitely use it. Most people can use it as long as you can stay reasonably balanced. It's totally adjustable to suit anybody's weight over 75 pounds.
Second, I was very impressed at the build, fit and finish. Very well put together. They did not skimp on quality with this pogo stick. There is no plastic anywhere. High quality metal hardware, and rubber all the way and made in the USA. Also, surprisingly lightweight.. I was suprised. You will be pleasantly surprised as well, for sure. Durable. Very durable. Won't have to buy another one ever again, I would imagine. Unless it was stolen or something else unfortunate were to happen. Third, the action is sooooooooooooo smooth! It's like bouncing on super silky air piston! Which is pretty much what you are doing. And YES, this bad mofo will bounce you as high as want to bounce! Seriously it's almost ridiculous! In a good way! I've had mine for four days and I can't get enough of it! I bought the pro and it is well worth the money for extra inches on the stroke and in the chamber. I can already bounce about thee to four feet comfortably and it is SO MUCH FUN! If you don't have great balance, it will take you a bit longer to get going, bit stick with it and you will be rewarded. So worth it! If you want a hardcore cardio workout that won't bore you to death, this is for you! You will sweat. Your heart rate will go way up. YOU WILL SWEAT! Killer core workout every time! And it is addicting! So addicting! I hate running personally and this is an amazing substitute for running! I'm sore in aces I didn't know I could be sore in! WTF?!
So basically, all I'm trying to say is if you are on the fence about buying a Vurtego Pogo Stick, get with the program and pull the trigger. You won't regret it, I promise. God forbid , I, or anybody else happens to see you out "limp hopping" around on some spring-driven garden tool from a "big box" store.
The sky is the limit. Actually, 11ft 1inch is the current limit. Until someone sets a new limit. Get out there and order your antigravity stick today!

D
DO
NDE or Casual

Pick your PSI! Love this thing.

I loved to pogo when I was a kid/teen. And my wife was against me spending a bit more for an adult pogo stick. The money I save from health problems later in life because I finally found an intense cardio workout that doesn't feel like a workout is WORTH IT. I'm smiling the whole time and out of breath after, and I just want to keep going.

M
Moses H.
Worth it!

I love my pogo stick! There was a slight manufacturing issue with my foot pegs, but I sent Vurtego an email, and they responded within a few hours and shipped me some new pegs for free. I love that anyone can jump on it just by adding or removing air. It is quite fun, good exercise, and I definitely recommend it. I also have not been careful with it at all, throwing it into the ground when bailing, dropping it, and landing hard on it. Other than some cosmetic issues, it is taking the abuse without issue! 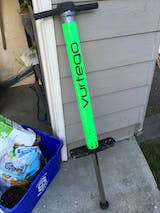